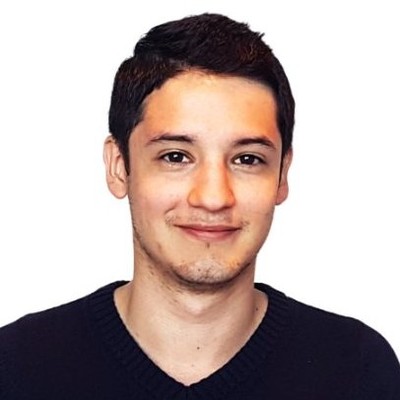 Alejandro Esquivel is a Software Engineer at Agnostiq, a quantum software startup. We talked to Alejandro about his work, his company and his experience with Commit.

Tell me about your background. Where did you work before joining Commit?

My background is actually in physics. I did my physics undergrad at the University of British Columbia, so my education is a little bit different from most people that went through a computer science program. I joined a lot of startups when I was in school: one of them was Ada, which was doing AI for customer support. After graduation I did a little bit of consulting work for a few more startups, and then I joined Commit.

I think it was the fact that I knew a few people who had previously joined Commit and had really good things to say about it. I liked how I could try different companies to see which one might be a good fit for me.

You currently work as a Software Engineer for Agnostiq. How would you explain that company to others? What do they do?

We’re building tools that allow you to run software that might take a lot of computing power to run on high-powered quantum hardware, aka supercomputers. We’re basically making it easier for developers to write scripts for quantum computers and leverage those technologies for practical applications.

What are you working on right now at Agnostiq?

I’m doing a micro service decomposition, which involves taking a really big codebase and partitioning it into smaller pieces so that it’s easier to work with for developers and contributors. I’ve been working on that and making sure the performance is there.

What initially drew you to Agnostiq? And how are you finding it there? What’s your team like?

I wanted to work for a company that was working in a domain that was different from other tech companies. Solving problems with quantum computers is something I’ve wanted to do for a long time since my undergrad, and this really gave me the chance to get exposed to that domain of knowledge.

In terms of the team, they’re just a really talented group of people. Everybody’s very smart, most of them have been researchers for a long time or even professors, or they just have a vast knowledge of physics. It’s been really interesting, just being around them just to gain new insight into new things.

What do you think about Commit’s mission and model?

I think Commit has a fantastic model because it allows people to iterate really quickly on their career. For most people it takes a decade to work for a few companies and figure out where they want to go. Commit flips that whole model on its head, because in this case you’re the one that’s in the trial, you’re giving the startup partner or the company a trial.

How has the Commit community supported you after you joined Agnostiq?

They’ve been really helpful. Just having access to a community of engineers who are solving the same problems you’re solving is really valuable. The Engineering Experience Team in particular is really great at catching up to see how you’re doing and making sure things are going smoothly. I think that by leveraging their support, people have a much better experience working at startups in general.

You get to solve problems every day, you’re always learning new things, and you’re always adding value: not just to the company, but also to yourself. I think that’s really why I love being an engineer. I can’t really think of too many downsides.

Who is somebody you admire in the tech field and why?

I think many people probably say this, but I admire Elon Musk. I think there are very few people who are trying to make sure we continue to exist as a human species, and I think he’s definitely doing a good job of that.

How do you stay up to date on the latest tech platforms and languages to know?

I use a lot of Pluralsight, which is a platform that lets you access lectures on different topics, from new languages to whole new fields like data engineering. I primarily rely on that because it’s got such a vast number of courses.